Where Nancy Pelosi Buys Her Masks 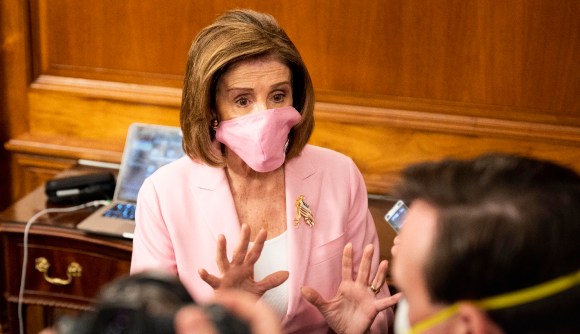 Since the beginning of the pandemic, Donald Trump has refused to wear a mask during his public appearances. As the U.S. president’s inner circle whispered, this is a habit developed out of fear of “looking ridiculous” in front of the press. Nancy Pelosi, the Democratic Speaker of the U.S. House of Representatives and Donald Trump’s main opponent, has taken a very different approach by wearing a face mask, making it an instrument of political self-expression that is not devoid of a certain style.

Pelosi’s trick is to carefully match the rectangle of fabric to her closet, not necessarily wearing it according to conventional rules – sometimes the mask doesn’t fit her face tightly. Nevertheless, in recent weeks the Democrat has showcased several fabric mask designs that perfectly match her colored suits.

Nancy Pelosi gets her masks mostly from Donna Lewis, a boutique located in Alexandria, Virginia. “She puts them on, and we quickly run out of stock, the demand is crazy,” the store owner explains to the American magazine Elle. And adds: “It’s the Nancy effect.”

Pelosi wears protective masks every day, using them as a tool for her own political expression. It is noteworthy that the politician approaches the selection of respiratory protection with great care, trying to combine them with her closet.

This caught the attention of Hillary Clinton, who is also an expert on colorful pantsuits. The former presidential candidate posted a photo of her friend on Instagram to pay homage to her pink outfit. In her caption to the photo, Hillary Clinton declared Nancy Pelosi “a leader in the ability to match a pantsuit with a hazmat suit.” That hint is meant to encourage the Democrat to continue down that path,” Adrian Kommunier concludes.

Pelosi is also known for her opposition to nuclear proliferation. As reported, the politician spoke about this at the 56th Munich Security Conference.

U.S. House Speaker Nancy Pelosi was caught on surveillance cameras while visiting a beauty salon in San Francisco that is officially closed for quarantine. Pelosi was not wearing a mask.

The video was published by the Fox News TV channel along with a comment from the salon owner, in which she accused Pelosi of double standards.

The speaker, for her part, said she was set up. She explained that she had visited the salon several times before and “trusted the word” of its employees, who said they “could take people in one at a time and that they could reserve time.”

Pelosi said she “accepts responsibility for being set up,” but demanded an apology from the salon.

Previous articleThe Importance of Good Lighting for Eye Care: Why USB Reading Lights are a Must-Have
Next articleLemonade Recipe That’s Perfect For Summer