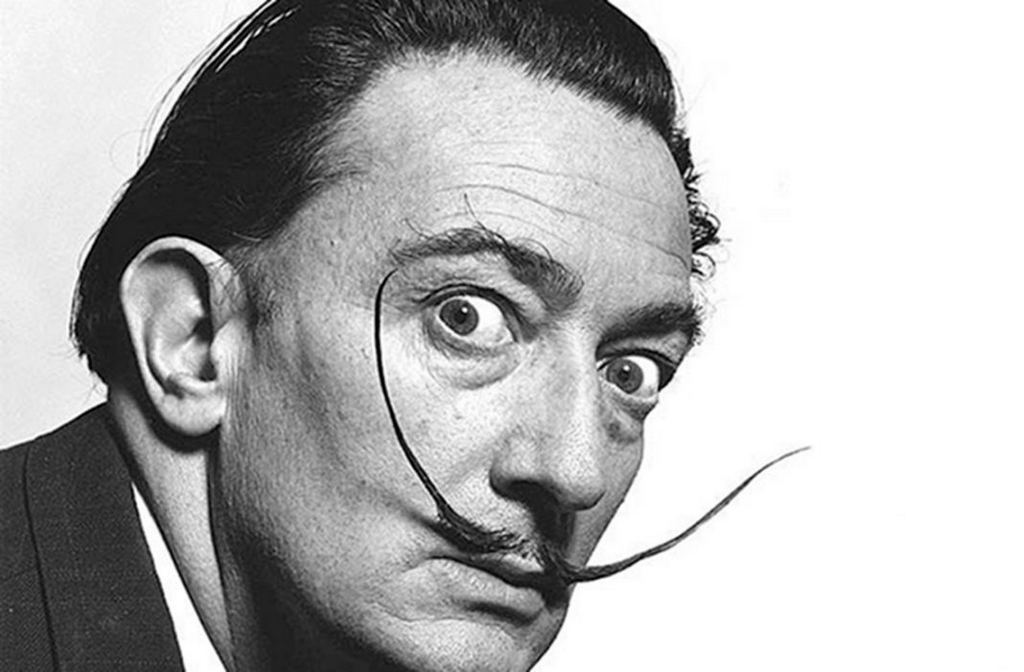 Salvador Dali was the most striking personality in the art world of the 20th century. A surrealist in painting, he brought to life his own fantasies, imagining that everything grotesque and improbable is the normal state of man and nature.

Salvador Dali—a great surrealist artist—was an eccentric and a bright man, like his fantastic dreams. When he died in 1989 at a very old age, he left us a legacy of the strangeness of his way of life, rivaling the mystery of his work. This is the epitaph most suitable for one of the most prominent personalities of the century. Unlike his colleagues, the Spanish artist constantly sought attention of the press and society. He was often branded as someone who was more interested in money than art. During his creative life, which lasted almost six decades, Salvador Dali created about two thousand paintings. He also wrote and illustrated books, created poems and essays, made decorations for performances, ballets, worked in advertising, and used many materials in his work—from jewelry and furniture to glass and porcelain. The “divine Dali,” as he liked to call himself, was all amazingly colorful: long smoothly combed hair, waxed mustache, endless flights between New York, Paris and a castle in Spain, demonstration of his ermine mantle and silver-handled cane… The list of eccentricities of the great artist could be endless.

” Every morning when I wake up, I experience an exquisite joy—the joy of being Salvador Dali—and I ask myself in rapture: What wonderful things is this Salvador Dalí going to accomplish today?” he said one day. During his first trip to America—the money for which he borrowed from Pablo Picasso—Salvador Dali showed reporters who met him a picture of his naked girlfriend Gala (Galina Diakonova) with lamb chops on her shoulders. When asked what the chops had to do with it, he said: “It’s very simple. I love Gala and I love lamb chops. They are together here. Perfect harmony!” A few days later, when Dali had to give a lecture in New York, he appeared to the audience in a sea-green suit and a military helmet. “It will be more convenient to descend into the depths of the subconscious,” the artist said, keeping full seriousness. In 1974, Dali signed a contract with an American advertising Agency for a TV ad, in which he painted pantyhose on a model. Later, when he left America for France, he was seen with a Buggs Bunny doll, a parting gift from the firm. “This is the ugliest and most terrible creature in the world,” Daly said. “I’ll paint it with mayonnaise and make it an art object.” When a reporter came to Dali’s house in Costa Brava one day, the artist took him to the garden and said: “Let’s climb a tree, it will be more convenient for us there.”

Salvador Dali officially married Gala, with whom he lived all his life, in 1982, shortly before her death. They had no children. The artist always said that he never wanted to have them. “Great geniuses always produce mediocre children, and I don’t want to be a confirmation of this rule,” he said. “I want to leave only my own legacy.” Dali loved to amaze and shock people. What else can explain this statement of his: “Sometimes I spit on a picture of my own mother, and it gives me pleasure.” Dali’s outrage was sometimes a continuation of his originality. When a surrealist suddenly declared himself a communist, it turned out that Dali was an ardent Spanish royalist. When other artists claimed that the only way to succeed was through poverty and bohemian simplicity, he made no secret of the fact that he wanted to succeed because success brought him money and convenience. When his contemporaries began to assert that truth in art cold only be achieved through an avant-garde experiment, Dali declared that he himself was very old-fashioned. Despite all the verbal equilibristics, Dali claimed that he was the only sane person in the world. The artist wrote about this in his autobiography “The Unspeakable Confessions Of Salvador Dali”, published in 1976: “It’s not me who is the clown, but our terribly cynical and insensitive society, which so naively pretends to be serious that it helps it to hide its own madness in the best way. And I’m not going to repeat it! I’m not crazy!” The peak of Dali’s work occurred in the period between mid-20s and early 40s, when surrealism was experiencing an upsurge. Many of his works of that period depict things that are not related to each other in terms of meaning in an environment that is not unique to them. Many critics still remember The Persistence of Memory painting as the most striking example of surrealism. Dali depicted a damaged clock against a background of strange objects, including a dead branch. Known as a joker, Dali said that the clock for him was “something like a tender, extravagant, lonely, paranoid and critical union of time and space.”

Genius in a tub

Salvador Dali was born in the Spanish town of Figueres to a middle-class family on May 11, 1904—two years after the death of his brother, who was also named Salvador. But, as usual, Dali disputed this fact. For example, he claimed that he was born two months earlier, but he was sure that he started thinking when he was still in the womb of his mother, seven months old. “It was warm, soft and quiet,” he said. “It was Paradise.” From an early age, Salvador wanted to be an artist, and by the age of ten he had already painted Helen of Troy, a bright oil painting. At the same time, he was a very original boy who liked to attract attention to himself, even if he had to fall down the high school stairs to do so. His favorite resting place was a large tub in the laundry room, where Salvador could spend hours thinking and drawing. He also liked to hide his long hair under a big black hat and later called himself the world’s first hippie. When Salvador was seventeen years old, his father sent his son to the Royal Academy of Fine Arts of San Fernando, where the talented young man managed to simultaneously win several prizes for the best work and be suspended from school for a year for inciting students to revolt against the wrong, as he believed, appointment of a new professor. A year later, he returned only to be expelled again in 1926, as announced by the Academy, “for supporting revolutionary ideas”. In his youth, the artist was influenced by different art styles. During a trip to Paris in 1928, his friend and Spanish artist Joan Miro introduced Salvador Dali to surrealism. Founded in 1924 by French poet Andre Breton, the surrealist movement in art proclaimed “the continuous use of the subconscious imagination”. Dali soon became the leader of this trend.

In 1929, Dali painted The Great Masturbator, one of the most significant paintings of the period. It shows a large, waxy-looking head with dark red cheeks and half-closed eyes with very long eyelashes. A huge nose rests on the ground, and instead of a mouth there is a rotting grasshopper with ants crawling on it. Such themes were typical of Dali’s work in the 30s: he had an unusual fondness for images of grasshoppers, ants, telephones, keys, crutches, clothes, and hair. Dali himself called his technique manual photography of concrete irrationality. It was based, as he said, on associations and interpretations of unrelated phenomena. Surprisingly, the artist himself noted that he does not understand all of his images. Although Dali’s work was well received by critics, who predicted him a great future, the success did not bring instant benefits. And Dali crisscrossed Paris in vain search of those who would buy his original images. His eccentricity even led to a quarrel with his surrealist colleagues, who excluded the already famous painter from their movement in 1934, declaring that “he shows an unhealthy interest in money and is guilty of vulgarism and academism”.

The confusion and the sunset

Salvador Dali dedicated many years of his life to business and commerce. For several years, he painted one picture a year—usually for a huge fee—and did everything from selling lithographs to creating costume designs and advertising airlines. “Dali sleeps better after receiving large checks,” he liked to say. He must have slept like a child, because his name was on the makeup kits, brandy bottles, furniture sets. The artist’s work in advertising has led most critics to agree that at least the last two decades of his work were marked more by his eccentricities than by any real artistic achievements. A few years before his death, Dali began to have serious health problems: Parkinson’s disease, deep depression and nervous exhaustion. After his wife’s death, he spent most of his time in an ancient Castle of Púbol, near Barcelona. In August 1984, his bedding caught fire due to short circuit in the bell for calling the servants. Weakened, with severe burns, Salvador Dali was moved to a wing of his own museum. Unfortunately, the elderly man was not able to fully recover from his serious illness. He was confined to a wheelchair and needed a feeding tube. The hands that created dozens of artistic masterpieces of the 20th century no longer obeyed him. Dali’s professional career fell into complete disrepair. Secretaries and agents extorted money from him, sold his copyright, reproduction rights all over the world. Most of the income sank in their pockets. Because of the artist’s careless habit of signing blank sheets of paper all the time, fake lithographs kept appearing everywhere. It is not surprising that soon there were loud scandals due to numerous forgeries of the master’s works. Dali, of course, became aware that the sheets of paper he had carelessly signed had turned into “fake Dalis”. But Dali was indifferent to this scandal. “People wouldn’t worry so much if I were a second-rate artist,” he snorted. “All the great artists were forged.” And indeed, Dali’s popularity has never faded among art lovers. In 1978 and 1980, retrospective exhibitions of his paintings in London attracted more than 250,000 visitors, and they were visited by more than a million people in Paris. Along with talented works, history has kept the incredible oddities of Salvador Dali. As the well-known critic Winthrop Sargent once remarked: “There is nothing out of the ordinary in Dali. He is simply extraordinary!”