Nostalgia, Don Draper once pointed out, derives from a Greek word for “pain from an old wound.” Television is awash in nostalgic revivals, reboots, and reunions, but they’re borne out of a far more recent pain: the difficulty any program or streaming service has getting your attention in a 500-show universe. If a new title can’t get noticed, best to bring back an old one. CBS All Access dusted off Jean-Luc Picard, after already launching with a Star Trek spin-off, Star Trek: Discovery. Most of Disney+’s programming strategy involves Star Wars and Marvel shows. HBO Max hoped to make a big splash on launch day with the Friends cast gathered around the Central Perk couch to swap stories, though the pandemic got in the way.

But Max hasn’t given up the reunion ghost. Last month, the West Wing cast and a few very special guests recreated a classic episode to promote voting. And yesterday, the streamer dropped a reunion of yet another Clinton-era NBC favorite, The Fresh Prince of Bel-Air. Add that to next week’s launch of a Saved by the Bell sequel series on Peacock, and the dream of the Nineties is absolutely alive on streaming.

But these two offerings take very different approaches to revisiting familiar territory, with Fresh Prince doing well by keeping things relatively simple, and Saved by the Bell trying to do way too much.

Mostly, the Fresh Prince special is like dozens of other reunions you’ve seen of high-profile series. Will Smith brings most of the surviving actors onto the living room set of his breakthrough sitcom, where they swap stories, share inside jokes, and periodically marvel at old footage. It’s fun, for instance, to see Smith — whose only quasi-acting experience prior to the show was in his early music videos — react to footage from early episodes where he would mouth his co-stars’ dialogue along with them until it was his turn to speak again. Alfonso Ribeiro of course does the Carlton dance again, and the salute to the late, great James Avery is just as tear-jerking as the famous “How come he don’t want me, man?” scene that plays as part of it.

What separates the special from so many others of its type comes towards the end, in a one-on-one conversation between Smith and Janet Hubert, who played Aunt Viv for the first three seasons, before being replaced by Daphne Maxwell Reid. Smith and Hubert have periodically argued in public in the years since, with Hubert being especially pointed about the colorism of replacing her with a much lighter-skinned actor. This is the first time they’ve seen each other in person since she left the show.

The blunt, emotionally fraught conversation these estranged performers share is not the sort of thing you ever get in reunion specials, which are designed to celebrate the good times and pretend the bad ones didn’t exist. It’s a credit to Smith — who’s become increasingly comfortable in recent years allowing intensely private aspects of his life to become public knowledge — that he not only gives Hubert her say, but allows himself to be portrayed as the immature villain of the story. The discussion is light on the details of exactly what happened, but at a minimum it’s clear that Smith was a 21-year-old kid oblivious to what his TV surrogate mom was struggling with, and who either allowed or encouraged the producers to force her out and paint her as “difficult,” a career kiss of death for a black woman of a certain age. (Between her salary at the time and residuals from episodes made after she left, Smith appears to have cost Hubert a small fortune. Hopefully, she got more than just a hug and a chance to vent in exchange for this sit-down.)

That section is so striking that the remainder of the special feels like an afterthought, including Hubert’s brief reunion with the rest of the cast. (Maxwell-Reid notes that she has never before met her Aunt Viv predecessor, but if they interacted once Hubert showed up, we don’t get to see it.) Still, it justifies the special’s existence all on its own, though the more traditional clips and anecdotes are entertaining. And while Smith and the other actors recreate the show’s iconic theme song, they don’t attempt to continue the series’ story itself in any way, which is probably for the best — and not just because Smith is producing a dramatic Fresh Prince reboot for Peacock that’s still early in development. 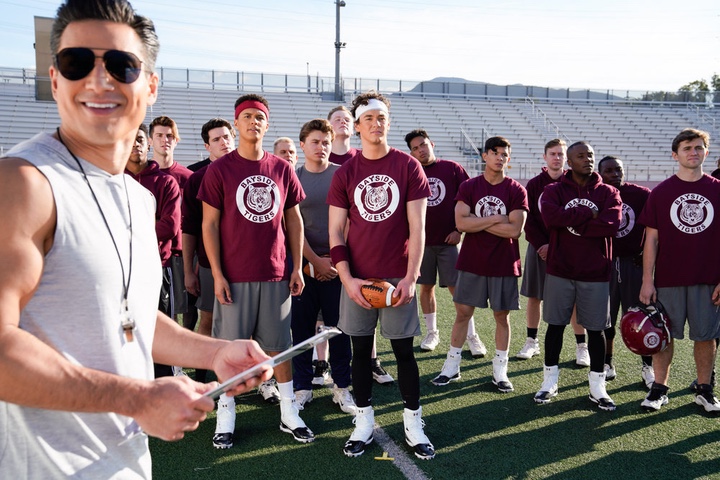 In the meantime, Peacock has a new Saved by the Bell series, which attempts to thread the needle between both remake and revival, and parody and tribute. Its approach is otherwise wildly different from the Fresh Prince reunion, but this show is very comfortable making its original hero seem like the bad guy.

Developed by Tracy Wigfield (30 Rock, Great News), the new Bell, which premieres on November 25th, picks up with Zack Morris (Mark-Paul Gosselaar, having made peace with his most famous role) as the vapid, inept governor of California. He’s made such a mess of his educational budget that he’s forced to close underfunded schools across the state and have their students attend more privileged institutions like his own alma mater, Bayside High, where his son Mac (Mitchell Hoog) looks and acts exactly like the teenage Zack once did. New students like Daisy (Haskiri Velazquez) and Aisha (Alycia Pascual-Pena) can’t believe what an obliviously privileged ass he and most of the other Baysiders seem to be.

Gosselaar and Tiffani-Amber Thiessen don’t appear much in the three episodes Peacock gave critics — though Elizabeth Berkley and Mario Lopez are regulars, with Jessie and Slater both part of the Bayside faculty. Still, it’s a bold choice not only to treat Zack as an outright villain, but to cast his doppleganger of a son in the same light, even though Zack is basically the same guy he was in old days. On the one hand, it’s a clever recontextualization by Wigfield, acknowledging that some of the antics that seemed adorable in the Nineties were actually awful. On the other, this is a show built to draw in viewers who once grew up with the whole TNBC lineup on Saturday mornings. Maybe it’s not the safest choice to rub their noses in Zack having been a monster all along.

But then, the new SBTB very much wants to have it both ways in both recreating and commenting on the original series. Mac and his friends — including Jessie’s jock son Jamie (Belmont Cameli) and Lexi (Josie Totah), who recently starred in a reality show about her gender transition — act exactly like Zack, Kelly, Slater, and friends did back in the day, while Daisy, Aisha, and Devante (Dexter Darden) are mostly confused. (As a further reminder of where the new show’s sympathies lie, it’s Daisy who can stop time and talk to the audience, rather than Mac.) But the longer the working-class kids stay at Bayside, the more they, and the revival in general, start to resemble the old show. Some of the actors are able to play both layers at once — Totah in particular is very funny and utterly natural, even when the show is deliberately at its most artificial — but mostly the two modes clash, rather than complementing each other.

The whole Galaxy Quest/Princess Bride idea of satirizing a thing while simultaneously recreating it is very tricky to pull off. When it works, few forms of entertainment are more satisfying. When it doesn’t, the results are ungainly. The grand unified field theory behind what Wigfield’s attempting makes more sense than, say, the weird blend of sitcom antics, soap plot-twists, and faux documentary realism of the short-lived BH90210, but it doesn’t quite hang together.

The original show was shot multicam style with a laugh track, while the revival is shot in the more modern single-camera fashion. That Mac and Jamie’s corny punchlines aren’t accompanied by phantom chuckles is perhaps meant as another comment on what was strange — and, if we’re being honest, not especially good — about the old show, which lives on in the hearts of its audience more because of the age at which they saw it than its quality(*). But it almost feels like the deliberate clash between old and new would play better if Daisy were constantly trying to figure out where the laughter was coming from whenever Lexi lets off a zinger. In the existing format, we’re just stuck for long stretches in an airless version of what was already pretty dumb 30 years ago.

(*) Every generation has their own version of this. Gen X alone has a half-dozen, starting with The Brady Bunch.

The Fresh Prince reunion is the more straightforward nostalgia play, even if the return of Aunt Viv the First adds a fascinating wrinkle that doesn’t often come in this sort of project. Saved by the Bell is a much bigger swing, and the audacity and weirdness of it is almost compelling on its own. But it’s easy to imagine lovers of the original feeling as baffled by it as Daisy and her friends are by Bayside High. And that’s the danger of TV nostalgia: It’s can be both delicate and potent, but it’s also a trap — one where trying to escape its shackles can create as many problems as it solves.