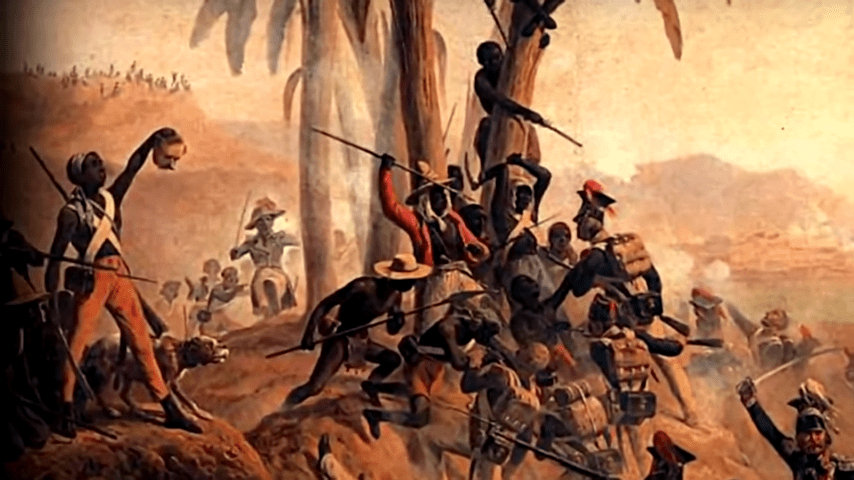 Worse than 200 years ago… This is how people live in Haiti. This country is the poorest in the Western Hemisphere: poverty, slums, crime — this is what tourists tell about Haiti. Bloody coups and shooting…

Who has cursed the land of Haiti?

And why people of this former paradise so unlucky?

Why needles are major weapon of Haitian Vodou priests?

Which dictator is compared to Hitler?

In February 2019, participants of an antigovernment rally burned the US flag. They also demanded resignation of Jovinel Moise, President of Haiti. Civil unrest began in 2018 when people accused the government of stealing the country’s money, and corrupt officials were not punished. But what had the US to do with that?

For a long time, the US had been influencing Haiti’s politics and imposed presidents favored by the American establishment. On the one hand, the US provided financial support to the country. On the other hand, all the money was stolen by local politicians and officials, and common Haitians didn’t get anything. For example, Haitian dictator Francois Duvalier stole more than 90 percent of financial aid from the US and accumulated a huge fortune — 600 million US Dollars.

About 70 percent of Haitians have no permanent work. And those who work earn only $3 a day. Prices are very high — no less than in Europe or in the US.

As there is no work, young people have nothing to do and gather in gangs. They can get money only by robbing someone.

Haiti is called the country of criminality, garbage and slums. There are no garbage bins — garbage is everywhere. And people seem to be too lazy to remove it.

Haiti is a country of contrasts. Port-au-Prince, the capital of Haiti, is divided in two parts. The upper city is for tourists and rich people, the lower part of the city is home of the poor.

Real rulers of people who live in slums are gangsters and Vodou priests. Vodou is a mixture of traditional African religions and Catholicism. Uneducated people fear those who claim to practice Vodou and obey them. They believe that Vodou practices can do harm and make anyone a zombie.

Haitians can hardly change their lives because of their poverty and unemployment. So, they believe that they are controlled by supreme forces. Instead of doing something themselves, Haitians try to contact these supreme forces and beg favors from them. They apply to all religious characters — the more, the better. Most often, they ask a lottery prize.

Haitians believe in Jesus Christ, in Vodou deities, in Buddha. One god is good, three gods even better! Many Haitians believe that the Earth is flat. Their geography textbooks consist of 40 pages only — half of them are just pictures.

One can say that Haitians are stuck in the past and cannot move forward. They are decades behind even their island neighbor—Dominican Republic, a country with the same climate conditions. This issue was widely discussed.

At first sight, it is Haitians who are to blame for their bad luck. They accepted their fate. They do not want to get more educated or work harder. But it is not that simple. Haiti seems to be a magnet for trouble. And science cannot explain this.

Haiti faces natural disasters all the time — earthquakes, epidemics. Meanwhile, all of this is not typical of the Dominican Republic. Some theories mention the mountain chain along the border between the two countries. But this can hardly be the key factor.

Haitians tried to shrug off the spell many times, but everything got even worse.

The poorest population burned forests to free some land and grow something they could eat. This led to soil erosion and impoverishment.

Even tourists who come to Haiti notice that they begin to attract negative events. Many tourists break their legs, lose their stuff or get attacked by criminals.

At the same time, Haiti might have become a paradise both for local people and tourists. The weather is mostly comfortable. Excellent climatic conditions make it possible to grow fruits and vegetables, as well as other agricultural plants. The island is washed by the Atlantic, and there are excellent sand beaches.

So, what is the problem? Many people believe there is a curse on Haiti.

When Spaniards came to Haiti, they began to implant Christianity, capture local women and send native men to hard work. Native Americans revolted and fought against Spaniards for more than a century. Finally, all native inhabitants of the island were killed or left the island. At the end of the 18th century Haiti was called the Jewel of the Antilles, but it became the cursed land in the beginning of the 19th century. Bloodshed and turmoil swept through the island.

Finally, the western part of the island was ceded by Spain to France. The French brought African slaves to the island and began to grow sugar cane, coffee and tobacco. They supplied half of the world’s sugar and 40 % percent of its coffee. Ten percent of colonists controled 90 percent of slaves.

At last, Louverture became Governor-General of the western part of the island for life. It was the first and the only slave rebellion in history that had succeeded.

Haiti was given another portion of hatred and blood when black people slaughtered about five thousand of white population. In fact, it was genocide, and since then Haiti has been fighting the entire world, including the US and themselves.

Francois Duvalier became President of Haiti in 1957. He was a doctor and gave the Hippocratic Oath. That’s why he was nicknamed Papa Doc. He became the embodiment of Haiti’s dark past.

Duvalier promoted his own personality cult and organized his own militia — Tonton Macoutes. These government gangsters were not paid official salary. They had to earn their living by extortion and murder. But Papa Doc surpassed them all. He prepared a torture chamber and came to watch people being tortured. With Papa Doc, the ancient curse of Haiti gained new power.

Eight of eleven million Haitians practise Vodou. They address loa or spirits and make sacrifices. Haitians believe that loa fulfill their wishes. Some rituals are bloody and cruel.

Duvalier denounced communism while the US financial aid was flowing to him. When John Kennedy became president, he spoke against the Haitian regime and cut off aid to Duvalier.

In response, Duvalier made an effigy (vodou doll) of John Kennedy and publicly inserted pins into it. He promised terrible and violent death to Kennedy. When this coincided with the Kennedy’s murder, Haitians believed in Duvalier’s sorcery even more. Only 10 percent of Haitians were literate, the rest of the people were easy to manipulate.

The history of Haiti shows that the whole people can be seduced. Haitians might restore plantations of sugar cane and their forests to improve their economy, but they simply do not want to change anything. They are not prepared to take responsibility for their own lives. They believe in zombies, spirits, lottery winnings thanks to some supernatural forces instead of doing something to make their lives better.

In fact, Haitians themselves became zombies of their false and destructive beliefs.