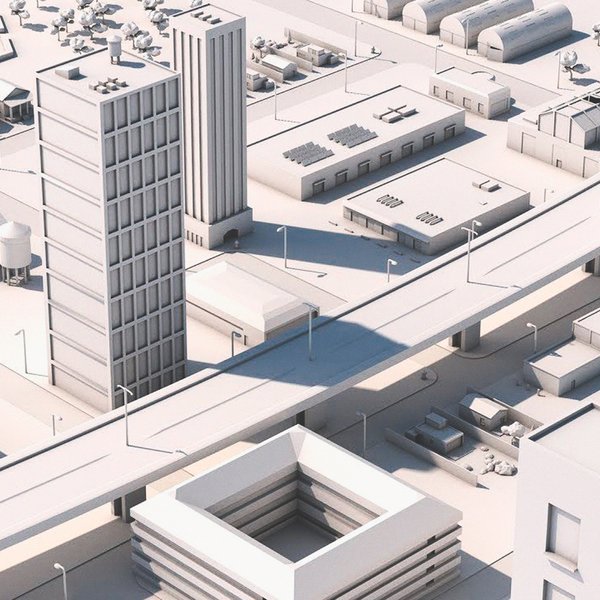 Many of us played as a child in SimCity 4, which has become the most popular urban simulator. There you can build a settlement and demolish it, make a huge metropolis or a backwoods village in the middle of beautiful nature. Alas, there are not many games that belong to the urban planning genre, and even less – can captivate for hours, as it did the same SimCity. If you miss the role of the mayor and want to build your ideal village, then perhaps these city building games will appeal to you.

In Planetbase you lead a group of space settlers who are trying to establish an outpost on a remote planet similar to Mars. In it you play the role of architect and base manager and must not only build, but also extract resources, grow food, and produce bots, all in an unfriendly environment. In addition, you have to think carefully about the immigration flow of colonists to recruit people with the right skills. The game was released in 2015, has pleasant enough even for the moment graphics and will be suitable for fans of sci-fi. 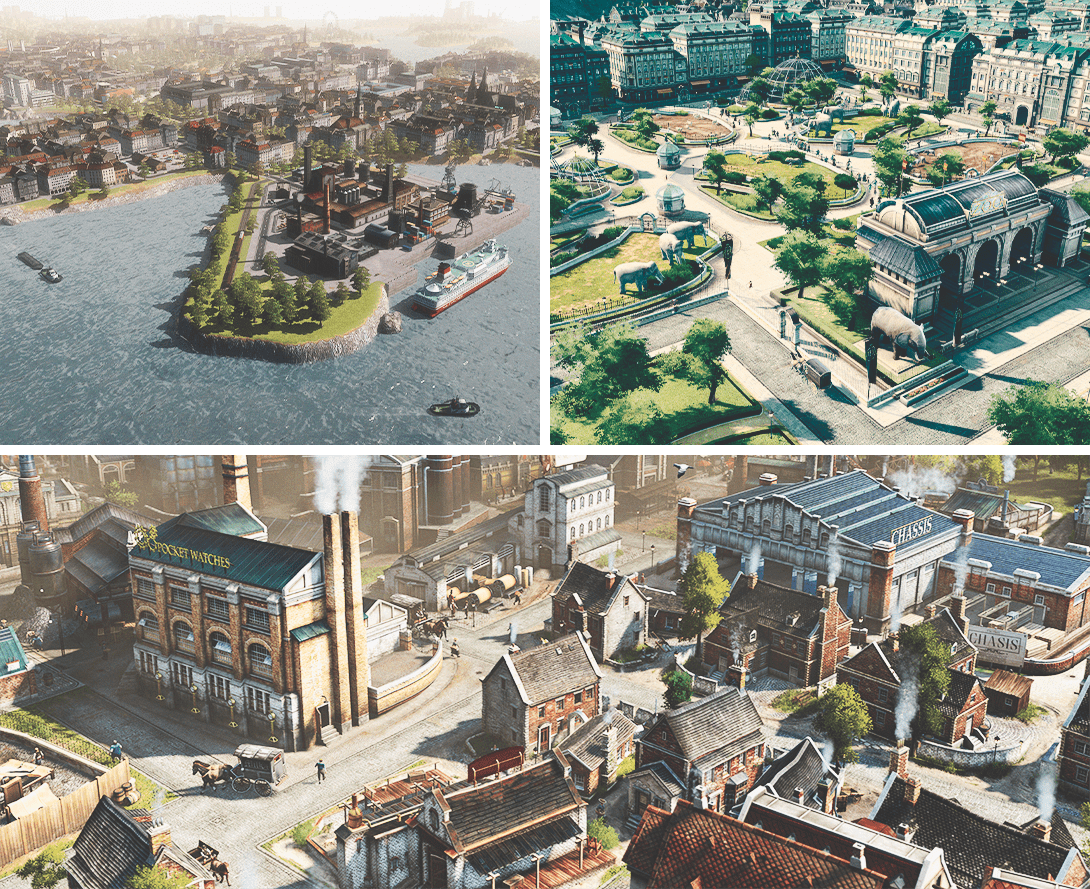 Regardless of which of the Anno games you choose, there will always be the same philosophy – building a city that will meet the needs of its population, resource extraction, production and the fight against rivals.
Anno games have always differed pleasant graphics and well thought-out gameplay, which does not get bored, even after dozens of hours spent in them. Among this series is a game about the past, such as the colonization of the Caribbean islands, and the future, where you have to confront the impending disaster on Earth or build a city on the moon.

Cities in Motion 2, released in 2013, is quite similar to SimCity – both externally and in content. But unlike SimCity, the emphasis here is not on the urban aspect, but on the development of infrastructure, creating better routes to transport passengers. On this will directly depend on how fast the city will grow. And different classes of transport are used, so you’ll have to make sure that all kinds of transportation are present in the city.
Cities in Motion 2 has multiplayer with cooperative and competitive modes, which makes it replayable. 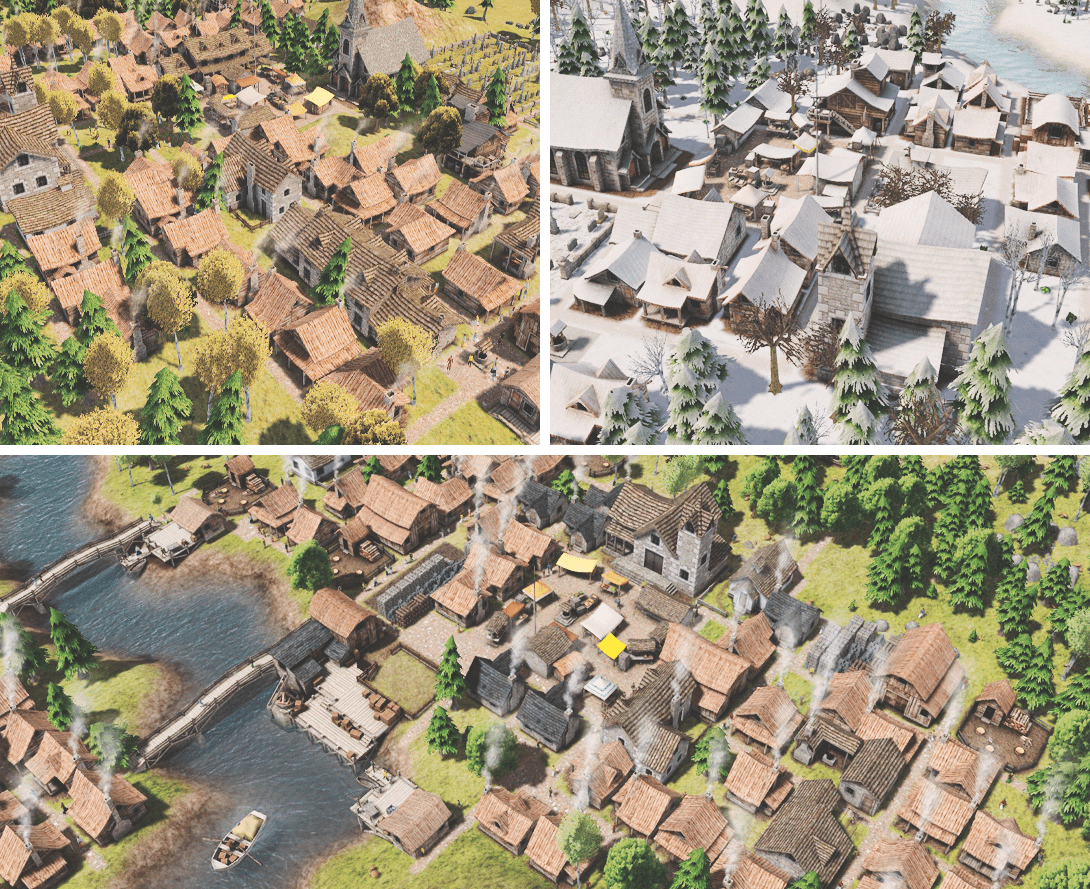 In this game you will control a group of outcasts who decide to start a new life in a new land. This group has a small supply of resources, and that’s it. The rest is up to you, creating a thriving city from a group of hungry outcasts. The main resource in the game is the citizens. They, just like in real life, are born, grow old, and die, and you have to keep an eye on their health and satisfaction in order for cities to grow.
Unlike many other city building simulators, there is no technology tree or restriction on building until a certain point is reached. You can build the best buildings at once, as long as you have the resources to do so.

How about becoming a dictator in your own “banana republic” and doing whatever you want? If yes, then Tropico is just for you.
In this city-building simulator you can develop your city, extract resources, move to new eras with the appropriate technological level, engage in science and trade in company or sandbox mode. An important difference between Tropico and other city-building simulators is the need to be re-elected. In order for El Presidente to win, you must keep your election promises, maintain a high level of public satisfaction, or become a bloody dictator who will rig the results, threaten other candidates, and literally force people to vote for himself. 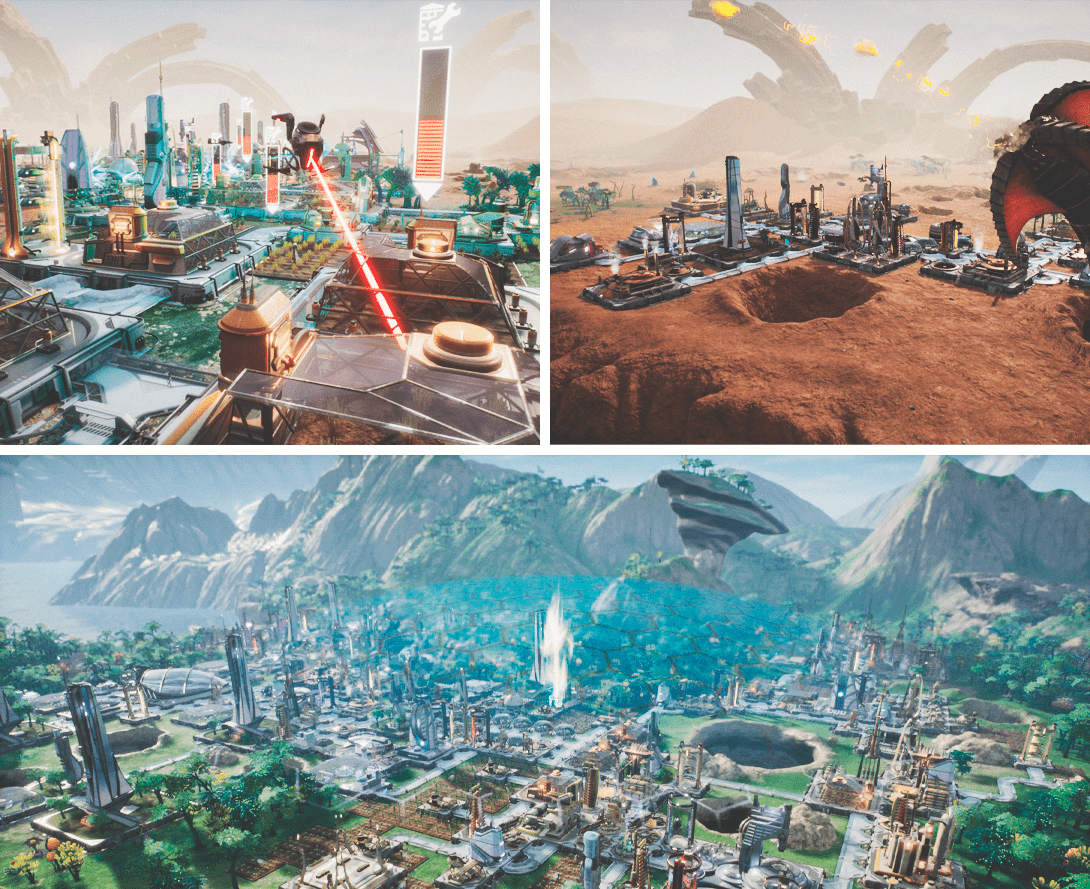 Aven Colony will appeal to fans of science fiction. The game is set on the planet Aven Prime with different types of terrain. Your task is to build colonies, create infrastructure in them, monitor the well-being of the citizens, extract resources. You’ll also have to confront various dangers (such as temperature extremes, exotic storms, toxic gas emissions, alien plague, and other threats). You’ll also have to explore the terrain, encountering a variety of alien life forms along the way.
As you progress through the game, you’ll be able to recover artifacts, repair broken ships, and rescue missing explorers.

7. The Settlers 7: Paths to a Kingdom

In this city-building simulation you play as a king or queen, starting with a simple village and expanding it to become a large kingdom. As you expand, you’ll encounter opposition from neighboring monarchs, with whom you’ll fight over territory and resources. In The Settlers 7: Paths to a Kingdom, you can choose from three paths of development: trade, scientific or military. Each of them implies different ways of winning, thanks to which the game has a good replayability.
The game has a multiplayer mode that allows you to play against each other or in alliance against bots or other players. 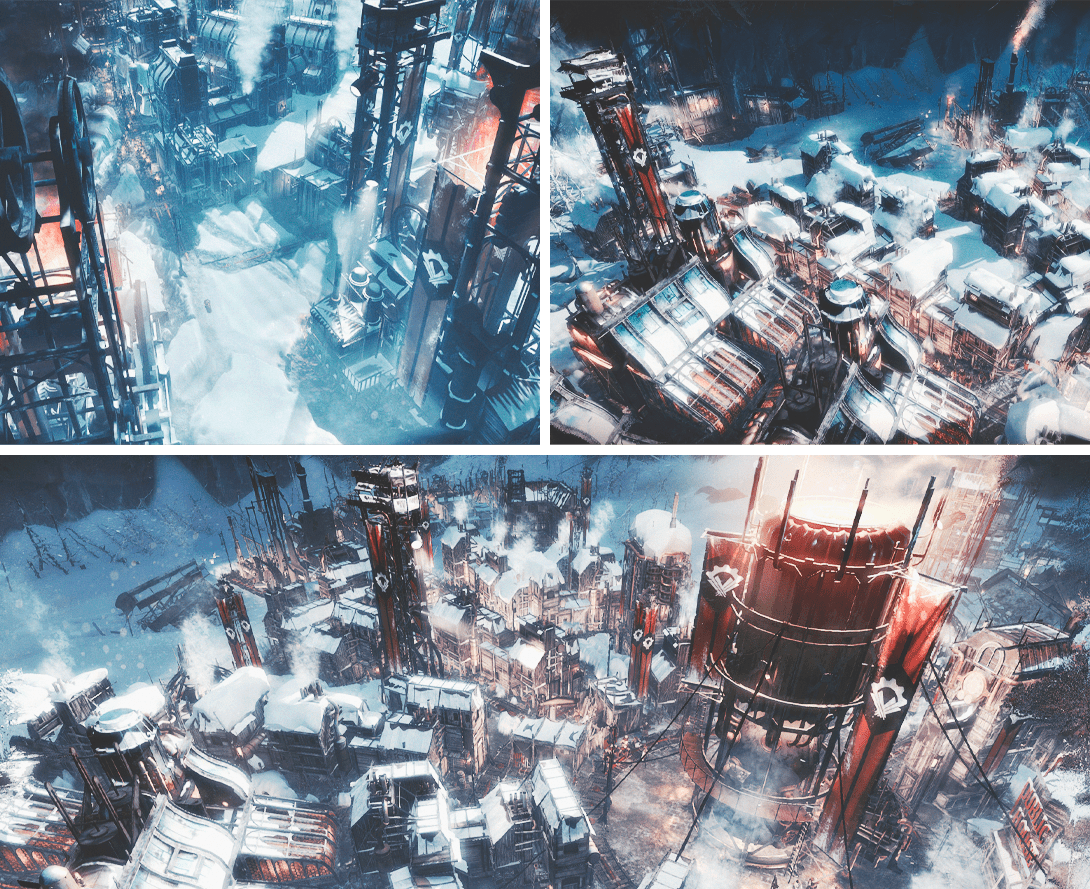 One of the most atmospheric games that has won the sympathy of many players. Frostpunk is set in an alternate universe in 1886, when the world is plunged into eternal winter. To survive, people flee the cities and build new settlements around generators that use coal to run and can warm nearby buildings. You take control of a group of settlers who have reached the generator, and your task will be to combat the growing cold.
In addition to widespread hopelessness and desperate attempts to fight the cold and hunger, there are moral dilemmas, beautiful visuals, and a great soundtrack that you can listen to outside of the game.

Cities: Skylines is one of the most beloved urban simulators by gamers, with high scores of players. In general, Cities: Skylines is a successful continuation of SimCity 4, the way the fans would like to see it in the next parts. In this game you can build small villages as well as huge megacities that are not limited in size. The advantage of this game is an active community that is constantly creating interesting modifications that improve gameplay and visuals.
As in SimCity, here you will have to take care of health, education, security, water, electricity, infrastructure and many other things that will help develop the city and attract investment. 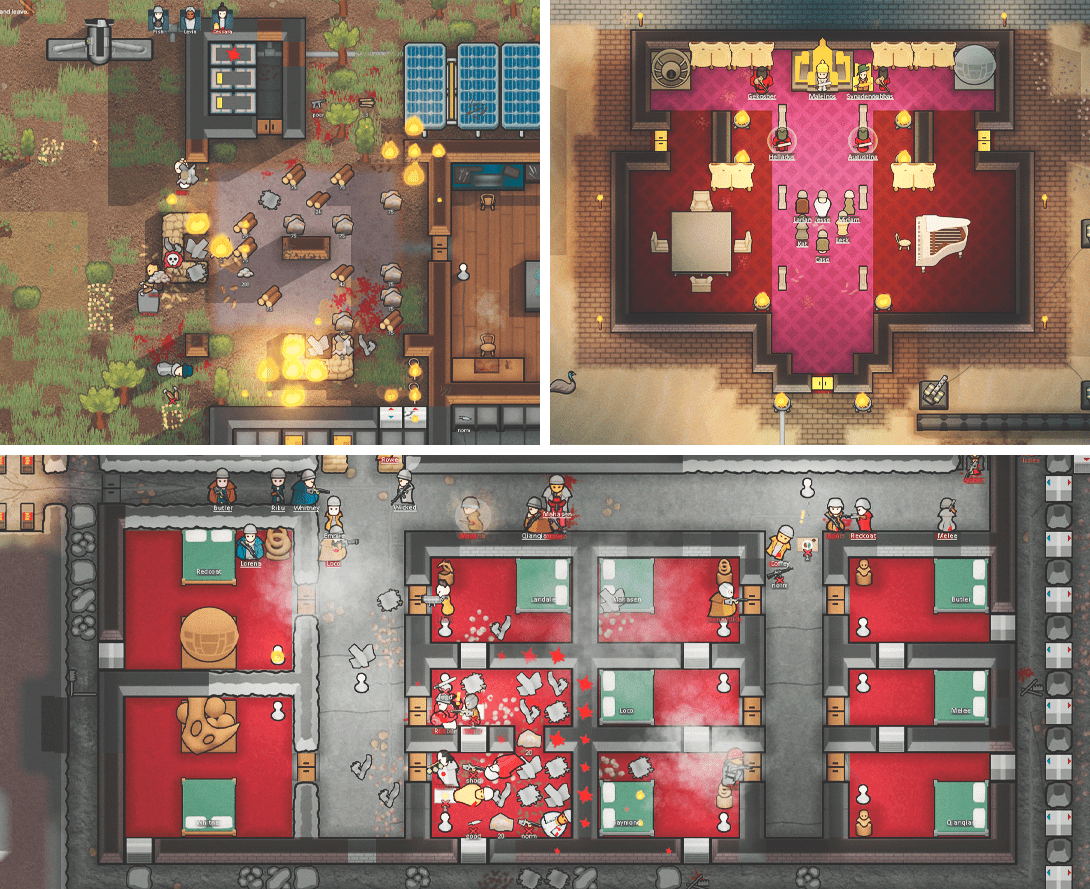 Want to know what a 10 out of 10 is at your fingertips? Then go to RimWorld, which has a score of nine or higher everywhere, and is often a real delight for fans of city-building simulators. RimWorld is a city-building, colony simulator. Your task is to build a colony in a frontier world. The game features a variety of resources, crafting items, trade and war.
The most important resource in RimWorld is the colonists. You’ll have to monitor their moods, needs and health, resolve conflicts in time and provide comfort to prevent nervous breakdowns. The main task is to build a space rocket and fly away from the planet. The developers took an interesting approach to the level of difficulty and instead of the classic scheme came up with storytellers, each of which tells their own story: one gives a calm classic plot without sharp turns, the other can add spice to the passage, and the third – first to bestow expensive goods that fell in the crashed shuttle, and after a moment to send a horde of savages at you.